Viewfield House was built by Colonel Ludovic Grant in 1803 in extensive grounds on the west side of Nairn and is approached through a long avenue of trees.

In 1812 James Augustus Grant bought the house for his upcoming marriage to Elizabeth Mackintosh of Millbank as their family home.

In front of the house stands the statue of Dr John Grigor (1814-1886), a medical practitioner and former provost of Nairn, who did much to establish Nairn’s reputation as a health resort and who bequeathed much of his wealth to the people of Nairn.

In 1864 Grant published his account of the expedition, A Walk across Africa, in which he focused particularly on what he called “the ordinary life and pursuits, the habits and feelings of the natives”. It also set out the first detailed description of Mycobacterium ulcerans infection, from which he had suffered during part of the journey.

Grant also published a paper in 1864 entitled “Botany of the Speke and Grant Expedition”. In the same year he was awarded the patron’s medal of the Royal Geographical Society, and in 1866 he was made a Companion of the Order of the Bath.

In 1868 Grant returned to his military duties as a lieutenant-colonel in military intelligence during the Abyssinian campaign, for which he was made a Companion of the Order of the Star of India and awarded the Abyssinian medal. Afterwards he retired from the army and returned to Nairn to settle down with his wife, who he had married in 1865. He continued to live there until his death in 1892.

The Grant’s Gazelle seen across northern Africa is also named after him.

Print
Get directions
Monday - Friday: 10am - 4.30pm Saturday: 10am - 1pm Sunday: CLOSED Always check their website for the most up to date information. 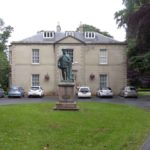