Dress for the Clan March

At each annual Clan Grant Gathering, members of the Society march to the opening ceremony of the Abernethy Highland Games behind a band of massed pipes and drums. Men are encouraged to wear traditional Scottish dress of kilts or trews: Ladies in kilts or tartan, with a traditional sash. However, if you do not have the traditional dress this is absolutely fine, as the Society welcomes everyone with an interest in Clan Grant to join in the march. We always give out a badge made out of a twig of pine tied with a tartan ribbon at the Clan Tent before the march. 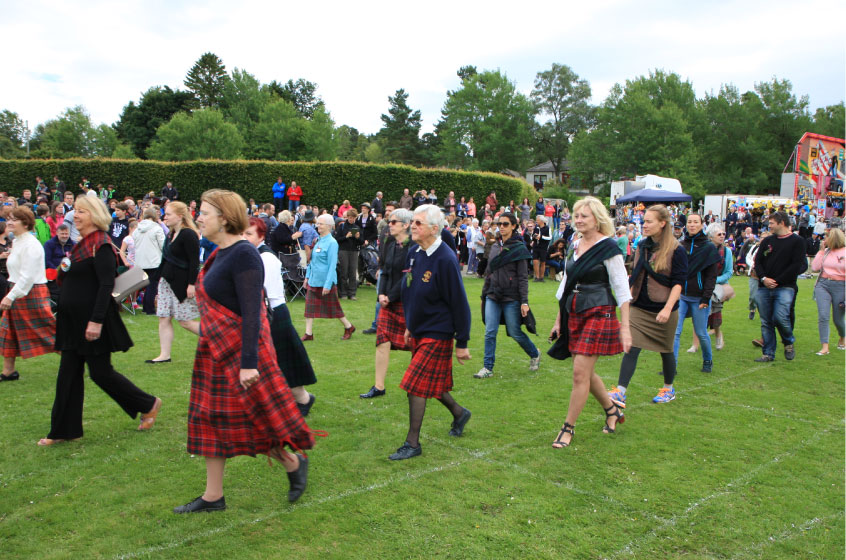 The Clan Parade and Route

Some helpful info from our former Parade Marshal, Chic Grant.

Make your way to the Nethybridge Hotel for around 12:15pm where you will be put into your order of march below by the Parade Marshal.

We will no doubt be given umpteen different requests at this time, which I will endeavour to comply with, but the only part you as marchers have to do is:

“Keep to the order of the march and show the spectators that you are proud to be marching as a Clan, headed by your Chief!”

We will line up in a column of three. The order to march will be given by The Parade Marshal.

Step off with the left foot and listen to the beat of the drum: i.e. when you hear the bass drum give a loud beat, it means your left heel should be banging into the ground.

Order to halt will be given on the left foot. You should then take one pace with your right foot and halt on the left. And that is all there is to it – for anything else just listen to me for my instructions.

The Clan then march behind the massed pipes and drums halting just before the entrance. When the order to enter the arena is given, we march in and go around once in an anti-clockwise direction. We then march past the entrance and do a left wheel to bring us in front of the games Chieftain.

Once halted, those carrying flags will be marched forward to form a backdrop for the speeches and presentations. On completion we will march back to our places.

The bands will then move off and the Clan will follow on. We will then halt just outside the arena entrance, before going back out of the gate.

Scottish formal evening wear of kilt and black tie for the men, and tartan and sash for the ladies, is encouraged for the Clan Gathering Dinner & Ceilidh on the Saturday night of the Clan Gathering, but it is not mandatory, and smart casual is also acceptable. We also have spare ladies sashes to hand out if you don’t have one of your own.